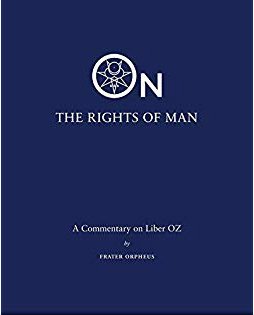 This book, which is approximately 148 pages long, details the history behind a one-page piece written by Aleister Crowley titled Liber OZ. For the average person who knows little about this liber, Orpheus’ book is good. It shows a lot of pictures of the different early editions. It details how many copies were printed of each and who received them. On this level it is very good and worthy of purchasing. Outside of a lot of historical fluff which doesn’t directly relate to Liber OZ, I really enjoyed it. However, I found it lacking in one specific area of which the reader should be aware. ON the Rights of Man is not the definitive say on this liber. I can understand why Frater Orpheus avoids telling his reader the truth about Liber OZ, seeing that he probably wants his book to be distributed amongst O.T.O. Initiates with the blessings of this Order’s leaders, whom he name-drops like water in the Acknowledgements. Basically, the author doesn’t want to make waves, but there are ways of informing people about the facts without revealing O.T.O. secrets. As I see it, the chapter titled “The Nativity of OZ” on the origin of this liber is outright misleading. It leaves the reader with the notion that this liber, known as The Book of Strength, was written at the beginning of World War II—but this is hardly the case. It would have been better to simply inform the reader that “Crowley first wrote this book, albeit with minor differences, about twenty-four years earlier, around 1919, but he never published it” and then state that “Crowley later took it, did slight rewrites in 1941 and released it.” Simple enough; it’s brief and not revealing any secrets. But Orpheus instead distorted the facts.

The closest the book comes to revealing the truth about Liber Oz’s origin appears in an article supplied by Frater Sabazius titled “Observations on Liber OZ” (p. 189). In this piece Sabazius refers to this liber as a “degree lesson … written around 1916.” It was not, unless by “degree lesson” he’s referring to it as being part of the initiation ritual itself, which it is. It was also not written around 1916, but rather three years later. As an example indicating when it was written, Frater Achad would acknowledge in a letter to his old friend Wilfred T. Smith dated November 12th, 1918 – “There is a possibility that the rituals may have to be revised, and the Words of the first Two Degrees correctly given, and the Masonic connection made less in evidence.” Crowley admits that he completed the rewrites to Minerval through III° in the early months of the following year. In the II° initiation ritual Crowley included a section titled “the declaration of the Rights of Man,” which Saladin reads aloud, and everyone in the Temple, with right hand raised, repeats what was said. Saladin then informs the candidate – “This you will sign in triplicate with your full name and address; one copy we retain; the others are to be affixed publicly to edifices symbolizing the civil and religious authority.” To this day the Rights of Man are still used in the O.T.O. initiation ritual which is probably why Frater Orpheus excluded it from his book. To repeat, the declaration of the Rights of Man very closely resembles what Crowley would later release as Liber OZ.

Furthermore, in his original manuscript [i.e. Commentaries] titled Extenuation of the Book of the Law, which was written at Cefalu (1920-5), Crowley refers to his “Declaration of the RIGHTS OF MAN” in his commentary to Chapter III v.60, and he actually lists these rights, one after another. The list is identical to the Rights of Man listed in the initiation ritual. Israel Regardie gives the Rights in full after III:60 in The Law is for All (1975), whereas, when Kenneth Grant and Marcelleo Motta published Crowley’s Commentaries, they simply included Liber OZ elsewhere in their books while removing the list from verse 60.

It was during the Second World War that this section was extrapolated from the II° ritual and the Commentaries, slighted edited and released. Frater Orpheus begins his book with this information about World War II while totally ignoring the earlier origins of this work. Crowley writes in his diary on November 5th, 1941 – “Oh for a title for my War Aims! Can’t use ‘Rights of Man’. I want to keep monosyllabic.” The final title of Liber OZ was decided on November 6th where he writes – “Decided on OZ; recopied the whole beastly thing.” The press proofs were ready on November 18th, and the first mass mailing took place on December 22nd, 1941. Historically we know that the II° Initiation ritual was never performed until April 15th, 1942. This was when Jack Parsons and his wife Helen were initiated into the Degree. The confusion as to when or why Liber OZ was first written might come from around this period, but we shouldn’t ignore when Crowley had actually written the II° ritual, or 1919.

All this babbling aside, again let me repeat, I enjoyed the book and, in truth, I understand why the author avoided telling the reader the entire story. Perhaps he didn’t know it? But then again, if he did, in this Thelemic world of hostility its best not to rock the boat; if the O.T.O. wants you to avoid writing about something, so be it. Keep your mouth shut and skip over the section in Liber OZ which states “Man has the right … to write what he will.” However, it’s simply silly to keep this information quiet. It is a well-known fact that candidates in II° O.T.O. will sign three copies of Liber OZ. This information was first published in Francis King’s The Secret Rituals of the O.T.O. (1973) almost forty-seven years ago—the cat has long been out of the bag!