Christmas 1943 was cold. One of those typically snowy English winter days which found Grady McMurtry in Crowley’s apartment at 93 Jermyn Street enjoying supper. Crowley and Grady shared a unique camaraderie during this period, which would result in a lifelong friendship. They often talked on magick, philosophy and the problems facing the OTO. Crowley admitted to Grady that there are numerous people whom he thinks might be interested in Thelema but acknowledged that due to the bad press which he had gotten over the years many avoid openly associating with him. He considered this to be a tragedy. Grady took this problem to heart and wrote an essay titled “Clear Crowley’s Name Campaign.” The paper begins by stating its policy: “To clear Crowley’s name of the slander instigated by bigoted journalists and propagated by the sensational press.” It is a great little piece, trying to “plan a defense of Aleister Crowley’s name.” He turned the paper in to Crowley, who was obviously very impressed. To some this paper may seem like mere common sense, but it showed to Crowley that Grady had leadership and organizational ability. The paper discussed the need to have a proper headquarters with a staff of an executive, secretary, treasurer and others whose task was to gather information and push such slogans as “Clear Crowley’s Name” and “Crowley is England’s literary martyr.” It was very carefully and methodically laid out, point by point. According to Grady, the movement should offer anyone who has the thirst for more knowledge the ability to aspire to the Great Work through such organizations as the Ordo Templi Orientis. Many historians place little importance on this document, but its significance lies in the fact that it showed Aleister Crowley that young Grady had the capability of taking charge and being an OTO leader. This “plan” of Grady’s was often mentioned in the upcoming months in one letter after another. Of priority was how to prove to the world that Crowley — not Churchill — was the real creator the ‘V’ for victory sign. Sadly, Grady would admit months later, “I still don’t know how we can prove that you started the V campaign.” 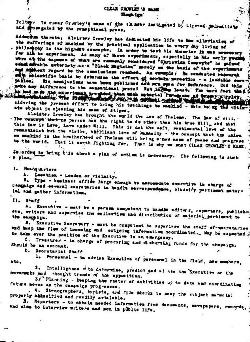 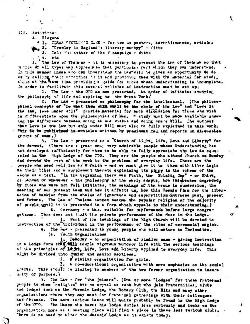 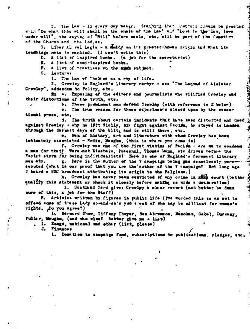 Policy: To clear Crowley’s name of the slander instigated by bigoted journalists and propagated by the sensational press.

Addendum thereto: Aleister Crowley has dedicated his life to the alleviation of the sufferings of mankind by the practicle application to every day living of philosophy in its highest concepts. In order to test his theories it was necessary for him to experiment. As many of these experiments, especially in his early youth, were at the expense of what are commonly considered “Christian Concepts” he gained considerable notoriety as a “Black Magician” merely on the basis of the experiments and without regard to the conclusions reached. An example: He conducted research on a scientific basis to determine the effect of certain narcotics – a laudable occupation. His conclusions have been published and are open for reference. Did this make any difference to the sensational press? Not in the least. The mere fact that he had made the experiment provided them material for reams of Sunday supplements featuring “The Fiend Crowley”, etc. It is well to bear this in mind when considering the present effort to bring his teachings to mankind – this being the ultimate object in clearing his name of stigma.
Aleister Crowley has brought the world the Law of Thelema. The Law of Will. The concept that no person has the right to do other than his True Will, and that this Law is Love, Love under Will. This is not the soft, sentimental love of the romanticist but the virile, brilliant love of humanity – the concept that the union on mankind in the brotherhood of Thelema will bring a New Aeon of peace and progress to the world. That is worth fighting for. That is why we must CLEAR CROWLEY’S NAME.

In order to bring this about a plan of action is necessary. The following is such a plan.

A.Executive – must be a person competent to handle editors, reporters, publishers, writers and supervise the
collection and distribution of material pertinent to the campaign.

B.Executive Secretary – must be competent to supervise the staff of secretaries and keep the flow of incoming and
outgoing information coordinated. May be expected to take over the position of the Executive in an emergency.

C.Treasurer – in charge of procuring and distributing funds for the campaign. Should be an account.

1.Personnel – to advise Executive of personel in the field, new members, etc.

2.Intelligence – to determine, predict and advise the Executive on the movements and thought trends of the
opposition.

3.Planning – keeping the roster of activities up to date and coordinating future moves as the campaign
progresses.

E.Reporters – to obtain needed information from documents, newspapers, records and also to interview writers and
men in public life.

1.CLEAR CROWLEY’S NAME – for use on posters, advertisements, articles.

3.Help the author of the V campaign – ditto.

B.The Law of Thelema – it is necessary to present the Law of Thelema so that people of all types may appreciate
that particular part which they can understand. In this manner those who can understand the Law will be given
an opportunity to do so by calling their attention to it and providing them with the material for study, while at
the same time providing a guide for those whose understanding is incomplete. In order to facilitate this several
vehicles of instruction must be set up:

1.The Law – The O.T.O. as now presented. An Order of initiates studying the philosophy of life and aspiring to the
Great Work.

2.The Law – presented as philosophy for the intellectual. (The philosophical concepts of “Do what thou wilt shall
be the whole of the Law” and “Love is the law, love under will” provide material for much discussion for those
who wish to differentiate upon the philosophies of man. A study must be made available showing the
difference between doing as one wishes and doing one’s Will. The subject that Love is the law but only under
Will must also be fully explained in this work. This to be publicised in articles written bt prominent men and
reprts on discussion groups of the same.)

3.The Law – presented as a “Church of Light, Life, Love and Liberty” for the devout. (There are a great many
admirable very people whose understanding has not developed sufficiently for them to be able to fully a
appreciate the Law as counseled in the High Lodge of the O.T.O. They are the people who attend Church on
Sunday and devote the rest of the week to the problems of everyday life. These are the people who need
religion as a faith – and we must give it to them with Liber Legis as their bible and a supplement thereto
explaining its place in the scheme of the Aeons as a text. “In the beginning there was Ptah, the Shining One” –
or Shiva, or Jahoveh or whatever – the philosophy of the early adepts, how this became degraded, by those
who were not full initiates, the meanings of the Aeons in succession, the meaning of our present Aeon and how
it affects us, how this Cosmic Plan for the liberation of Mankind from the chains of ignorance and superstition
imbraces past, present and future. The Law of Thelema cannot become the popular religion of the majority of
people until it is presented in a form which appeals to their understanding.)

4.Ceremony – a Mass suitable for performance before large congregations. This does not limit the private
performance of the Mass in a Lodge.

1.Part of the teachings of the High Church will be devoted to instruction of the individual in the performance of
the rites of ceremonial magick.

5.The Law – presented to young people who will mature as Thelemites.

1.DeMolay – or organization of similar name – giving instruction in a Lodge form that will couple vigorous
outdoor life with the serious teachings of the princeples of Light, Life, Love and Liberty applied to
everyday life. This might be divided into junior and senior sections.

2.A similar organization for girls.

3.A co-educational organization with more emphasis on the social graces. This should be limited to
members of the two former organizations to insure unity of purpose.)

6.The Law – for “the joiners”. (ONE or more “Lodges” for those fraternal people to whom “religion” has no appeal
as such but who join fraternities, clubs and lodges such as the Masonic Lodge, the Rotary Club, the Elks and
many other organizations where they may meet for fraternal gatherings with their colleagues and friends. The
more serious Mason will quite probably be found in the High Lodge of the O.T.O. The Mason who takes his
Lodge duties less seriously and looks on the organization as a meeting place will find a place in these less
serious clubs.

7.The Law – in every day usage. Teaching that Brothers should be greeted with “Do what thou wilt shall be the
whole of the Law” and “Love is the law, love under will”, the saying of “Will” before meals, etc. will be part of
the function of the Church and Lodges.

C.Liber Al vel Legis – a study on its praeter-human origin and what its teachings mean to mankind. (I can’t write
this)

D.A list of inspired books. (a job for the secretariat)

1.The Law of Thelema as a way of life.

a.Exposing the editors and journalists who vilified Crowley and their distortions of the truth, etc.

c.The true reason for those experiments seized upon by the sensational press, etc.

d.The truth about certain incidents that have been distorted and used against Crowley – why he left Sicily, his
fight against Facism, he stayed in London through the darkest days of the blitz and is still there, etc.

e.Men of history, art and literature with whom Crowley has been intimately associated – Rodin, Maughm (sic),
(this is where you come in)

f.Crowley was one of the first victims of Facism – are we to condemn a man for that? Were not Einstein,
Toscanni, Thomas Mann, etc. driven before the Facist storm for being individualists? Here is one of
England’s foremost literary men, etc.

h.Crowley has never been convicted of any crime in any court (BETTER qualify this statement or check it
closely before making so wide a declaration)

i.Scotland yard gives Crowley a clear record (and better be damn sure of this, a job for the staff)

H.Articles written by figures in public life ( I’ve worded this so as not to offend some of these Lady so-and-so’s
you speak of who may be militant for women’s rights. Do you agree?)

1.Bernard Shaw, Tiffany Thayer, Ben Abramson, Mencken, Cabell, Dunsany, Fuller, Maughm, (and who else?
Better give me a list)

Note: No copy survived in Grady McMurtry’s archive until a copy was discovered in the collection of Crowleyanity in the Syracuse University back in the mid-1970s. We also wish to apologize for all the numerous spelling errors and strange formatting but we have decided not to change anything and to simply publish it exactly how Grady wrote it. It must be remembered that this was more ‘Notes’ to be discussed with Crowley more so than a finished piece suitable for publishing.

I wish to thank Frater Petros of Leaping Laughter Clerk House for making this page possible.