A Review of The Inauguration of Aleister Crowley’s New Aeon of Horus by Richard T. Cole, 2019 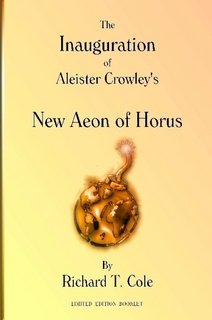 Today I heard some news—one day late. Just yesterday a scandal broke loose here in California, United States of America. The media cried aloud that the California Department of Motor Vehicles made $51 million last year selling its citizen’s private information—without our knowledge or permission. It just so happens that 51 is the enumeration of the English phrase “I AM” (in Qabalistic tradition, a phrase of Kether-1). That synchronicity pretty well augurs the genius of Richard Cole’s limited-edition booklet The Inauguration of Aleister Crowley’s New Aeon of Horus.

Since his childhood, one way or another, Cole has earnestly engaged with this weird phenomenon of Aleister Crowley. What is he all about? What is IT all about? With this 2019 booklet, Cole marks a culmination of his lifetime of exploration of the New Aeon.

Many of Cole’s books have delighted and intrigued me over the years. They scintillate his quirky outlook, coalesce his incisive, obsessive spirit of inquiry regarding Thelema, and flaunt his warped sense of humor. The Inauguration of Aleister Crowley’s New Aeon of Horus is my favorite to date.

Cole illuminates the essence of the New Aeon: reality’s operating system has undergone a complete upgrade. “Abrograte are all rituals, all ordeals, all words and signs” (Liber AL vel Legis I:49). Cole explains just what this means. In a nutshell, all the stuff people needed for magick and spiritual attainment in previous Aeons—throw it in the bin. You don’t need any of it. Now, under the new operating system, there is an immediate, immensely simple way of tapping directly into divine creative potential. He cites its Qabalistic basis.

The utter highlight of Cole’s booklet is his clear, illustrated explanation of how “Do what thou wilt” magick actually works. In many ways, the virtuosic Cole reminds me of a Carl Jung except with a wacky and perverse sense of humor.

A particularly brilliant section comprises Cole’s discussion of the Internet as a “physical reflection of Homo sapiens’ potential for organic interconnectivity.” Cole reveals the internet-fueled melt-down of the old Aeon’s most revered social and political institutions as a harbinger of a to-be-hoped-for spiritualized realization. He shines when he describes conflicts waged across the internet as, quite literally, external reflections of real-but-invisible battles fought within our collective psyche. Cole “gets” it.

By contrast, the sections on New-Aeonic gender and sex magick strike me as slightly off the mark, but never completely off target. For instance, Cole quotes from the script of The Wolf of Wall Street where one male character strenuously advises another male to “jerk off” at least twice a day to balance the mental work and “keep the rhythm below the belt.” Cole writes, “This brief and jocular exchange includes ALL the theory and practice anyone will ever need to know about the mysteries of old and New Aeon Magick – simple as that!” Male-bodied individuals inclined to realize their True Will should pause before taking these sex-magick instructions literally. Read literally anything on tantras regarding the basis of my concern for males—ironically not for females. But if you are male, I suppose try it yourself and take notes. I have no personal experience on this one; I only know what I hear from my extremely experienced male teachers and colleagues. Yet, even this section, if taken more metaphorically, is spot-on.

To take another example where I can personally weigh in, Cole describes how the LGBTQ+ communities have expanded the binary pink / blue gender / sexuality system into a rainbow of possibilities and actualities. “The children of [the new Aeon] display all colours, reflecting their infinite diversity and absolutely right to express it.” The diversity isn’t new, but the “overt individuality” and insistence on our right to express ourselves is new. So far, beautiful. But since this section occurs just before Cole’s apparent claim that “jerking off” a lot is all you need to know about sex magick (for whom?), I wish he would have clarified where he was going with this.

I worry that external LGBTQ+ phenomena are being mistaken for internal / vertical reality because back in the Qabalistic sections, Cole writes that in previous Aeons we have explored the female mysteries, followed by the male, and then he announces, “Now, we have a third in the fledgling and mushrooming culture of gender-fluid, non-binary entities.” A third set of mysteries? No. He’s on to something uniquely new-Aeonic here, but neither the female nor the male mysteries were based in culture, and 99.9% of people on the currently exploding rainbow of infinite varieties of gender and sexual expression are still boring old male or female, based only on how their bodies move energy, not on how they identify or express their individuality. The same old mysteries still apply, except in a new relationship. I will explain what I mean and how I know.

As a gender-fluid pansexual myself, I fly the rainbow flag. Of particular interest here, I have been a practicing Western tantric (keeping records) for nineteen years, fourteen of which I took testosterone, grew a full beard, changed my legal name, and lived and worked in as masculine as a mode as I could muster. As it turned out, despite my male-typical hormone composition, my body stubbornly moved energy in the female way, not the male way, and not in some unidentified “third” way. Nope. Regardless of my masculine / gender-blended expression, the same old female mysteries applied. Now, during the last five years, I have embraced the female mysteries as my own, with the result I have blossomed creatively beyond my wildest dreams. The fact that I have stopped taking testosterone and started grooming myself to appear feminine is emblematic but, I suspect, only an enhancement on a technical level. The fact is, for sex-magical purposes, it doesn’t matter what exciting new color of gender or sexuality you embrace. All that matters is which of two forms your gonads are in. That is what I learned from long-term, practical experience.

Rather, Cole’s example of LGBTQ+ liberation exactly parallels his brilliant example of the internet. Just as the internet is quite literally the “physical reflection of Homo sapiens’ potential for organic interconnectivity,” the explosion of people coming out of the closet and expressing our gender and sexuality in gorgeous new ways actually augurs the revival and reincarnation of the recently-repressed feminine mysteries in cooperation, balance, and ecstatic UNION with the male. Why do I say that the upsurge in people’s insistence on expressing their uniqueness is a resurgence of the feminine mysteries—for males as well as females? It’s because the “feminine” in magick has nothing to do with its cultural expressions. Zero. Rather, the “feminine” mysteries concern form, Yin, restriction, Saturn, Binah, Law, boundaries, Prakriti. To value the feminine in magick is to insist, “That form which makes me uniquely me IS ALSO divine. It is not incidental.” In the New Aeon it’s no longer good enough to insist on the truth that we are all one and the same in Christ. That also is still true, but now our real, innate, individual differences (not ones accidentally acquired in the process of surviving) are seen to also reflect Divinity, to also express our unique Law. Do what thou wilt shall be the whole of the Law.

There is no new third category of titillating people. If anything, the external phenomena of gender-crossing, gender queering, gender-blending, etc. reflects the dawning realization that if our gonads are female, we can productively embrace our unmanifested Self as masculine, and vice versa. No rules even here, but the point is, insofar as we bring our manifested and Angelic selves into complete balance, we neutralize gender. In the new Aeon we are bipolar gender-wise, and we aim for that Zero point, that cancelling out of inner with outer. Maybe I can bring this discussion back into alignment with Cole’s way of speaking by saying, we are all potentially gender-neutral, but that gender neutrality is a specific achievement in dynamically balancing inner and outer, not a natural fact. Unlike in the last Aeon, we can no longer remain fixated on the surface of things. As Aleister Crowley showed us, even while in the flesh we really can cross the Abyss to the realm of pure potential where the opposites are ONE. And on that much I am certain Cole is clear.

Finally, if I may gush, Cole ends the book on a delicious cliff hanger. He discusses a machine he created that can generate synchronicity, including a fascinating mishap that proves its effectiveness. No spoilers here; I’ll say only it’s an amazing story, of which I have no doubt that it happened. I heard whispers of this magick-making machine from Cole some years back and have been an enthusiastic supporter ever since. At the end of this book, he promises he will soon be releasing descriptions and schematics of said machine in forthcoming volumes called The Paranormal Decided; 666, Sex, and the New Aeon of Horus; and The Governing Dynamics of Thelema. More, he announces that one or more of the new books will reveal the synchronicity machine’s underlying principle, “an elementary technique, the utilization of which ‘opens a paranormal portal.’” Based on what I’ve read in this book, I believe it, and I can hardly wait to read more.

To pick up a copy of Mr. Cole’s new book, click HERE.