Your education is about to begin.

This is the story of the 4 rivers of Paradise.
Sometimes known as the map of Atlantis.

We have gone thru Pison and Ghihon. Technically
Mezla is not one of the rivers, but the Source, like the
Ganges.

The 3rd river is Hiddekel, **** = 139. This goes
from the Visudha chakra to the Anahata chakra
(translation: to Tiphereth… your heart… also known
as the Spider, Pelican, and or 5=6… Depending). It
is the East. 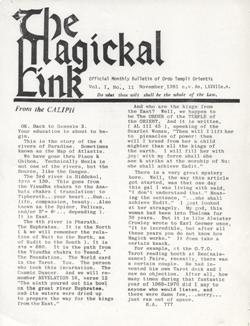 The 4th river is Pharath. The Euphrates. It is to the North (and we will remember the relationship of Nuit to the North, as of Hadit to the South). It is *** = 680. It is the path from the Visudha chakra to Yesod. The Foundation. The World card in the Tarot. You. The person who took this incarnation. The Dosmic Dancer. And we will remember REVELATION 16, verse 12 “The sixth poured out his bowl on the great river Euphrates, and its waters were dried up to prepare the way for the kings of the East.”

And who are the kings from the East? Well, we happen to be the Order of the TEMPLE of the Orient. And it is written, (AL III 45), speaking of the Scarlet Woman, “Then will I lift her to pinnacles of power: then will I breed from her a child mightier than all the kings of the earth. I will fill her with joy: with my force shall she see & strike at the worship of Nu: she shall achieve Hadit.”

There is a very great mystery here. Well, the way this article got started, was that one day this gal I was living with said, “I don’t understand that.” Meaning the sentence, “…she shall achieve Hadit.” I just looked at her strangely. My God this woman had been into Thelema for 30 years. But it is like Aleister Crowley wrote to Karl Germer once, “It is incredible, but after all these years you do not know how Magick works.” It does take a certain knack.

For example, at the O.T.O. Tarot reading booth at the Ren (naissance) Faire, recently, there was a certain couple. He had invented his own Tarot deck and I saw no objection. After all, how many times during that fantastic year of 1969-1970 did I say to anyone who would listen, and there were damn few,…sorry… just ran out of space.

I wish to thank Frater Orpheus for making this page possible.

Click here to read the next article in the series.

FROM THE CALIPH main page