So, Genesis 2, part 4. The Rivers of Paradise and why
each Tarot card represents a mirror of your psychic body.
In the Egyptian pyramid mysteries, there were 22 Pylons
(a Pylon is a gate), the 22nd of which was invisible. That
is what we would call the Fool. 22 pylons, 22 major Atu
of Thoth in the Tarot. If you could not find the invisible
One, you were obviously not an initiate. You were also
dead. But I will explain that some other time. In the Orient
that is what is called a joke.

But what is not a joke is the KABBALAH
DENUDATA.. Personally I use the Mathers edition,
London, 1951. On plate VIII, facing page 41, there are
two hexagrams. The upper is ARIK ANPIN (or
Macroprosopus, if you prefer), and the lower is Zauir Anp
in (you), Microprosopus. 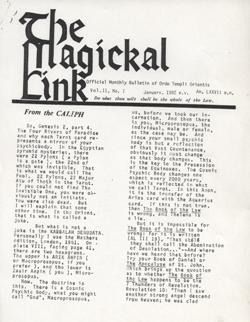 Now. The doctrine is this. There is a Cosmic Psychic Body, what you might call “God”, Macroprosopus, us, before we took our incarnation. And then there is you, Microprosopus, the individual, male or female, as the case may be. And since your small psychic body is but a reflection of that vast Countenance obviously it must change as the body changes. This is the key to the Precession of the Equinoxes. The cosmic Psychic body changes one aspect every 2000 years, which is reflected in what we call Tarot. In this Aeon, it is the transfer of the Aries card with the Aquarius card. If this is not true, then The Book of the Law is wrong, and Thelema is a lie.

But it is impossible for The Book of the Law to be wrong: for it is written, (AL III 19), “That stele they shall call the Abomination of Desolution…” and where have we heard that before? Try your book of Daniel or The Apocalypse of St. John. Which brings up the question as to whether The Book of the Law happens to be the 7 Thunders of Revelation. Revelation 10: “Then I saw another strong angel descend from heaven; he was clad in a cloud with a rainbow over his head, his face like the sun, his limbs like columns of fire, and a small scroll open in his hand. He set his right foot on the sea, his left upon the earth, (note the Temperance card, Waite deck) and shouted like a lion roaring: and at his shout the seven thunders gave voice. After the seven thunders had spoken, I was going to write it down; but I heard a voice from heaven saying, “Seal up what the seven thunders have said, do not write it.” Which makes us about the middle of the Apocalypse when the appalling abomination will be set up in the Temple. And when is that? Daniel 10:14 “ So I asked, ‘Oh my lord, what is it to be the last phase before the end? When the appalling abomination has been set up.” if you were pious Jew with the gift of prophecy in the Babylonian captivity and looked down to the end of Time and saw the Stele of Revealing of a Prince of Egypt exalted on the High Alter of the Holy of Holies, as we do every time we enter the Temple, you would freak out. So did Daniel.

Anyone else want to know if I read the Bible? Crowley memorized it.

I wish to thank Frater Orpheus for making this page possible.

Click here to read the next article in the series.

FROM THE CALIPH main page