In December of 1977, a now defunct newspaper called the Berkeley Barb released its Joy of Sects issue (No.643 Dec.9-15th 1977) which was subtitled A Mystic Eye View of Krishnas, Crowley & Guru Ma. On page 7 there was a full-page article which interviewed Grady that was titled How Aleister Crowley Came To Berkeley. It was a rather good article, very informative and gave the basic history of Crowley’s OTO and who Grady Louis McMurtry was in relationship to the whole Thelemic world. In this article it discussed Grady being the Caliph and it pointed out “since Crowley considered himself a ‘prophet’ then naturally his successor would be a ‘Caliph’.” The article ended with explaining the circumstances revolving around the recent feast of Crowleymas held on October 12th and the signing of the official OTO Charter stating, “Like a phoenix rising from the flames, Aleister Crowley’s Ordo Templi Orientis appears to be reborn, thanks to Bay Area occult know-how and a little divine help.” 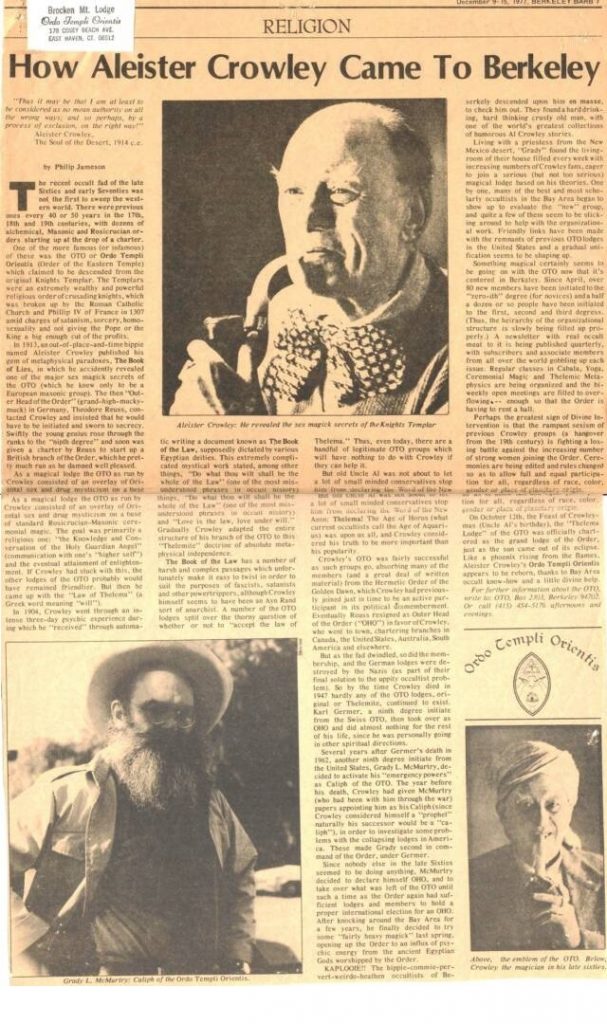 How Aleister Crowley Came To Berkeley

“Thus it may be that I am at least to be considered as no mean authority on all the wrong ways; and so perhaps, by a process of exclusion, on the right way!”
Aleister Crowley,
“The Soul of the Desert,” 1914 c.e.

The recent occult fad of the late Sixties and early Seventies was not the first to sweep the western world. There were previous ones every 40 or 50 years in the 17th, 18th and 19th centuries, with dozens of alchemical, Masonic and Rosicrucian orders starting up at the drop of a charter.

One of the more famous (or infamous) of these was the OTO or Ordo Templi Orientis (Order of the Eastern Temple) which claimed to be descended from the original Knights Templar. The Templars were an extremely wealthy and powerful religious order of crusading knights, which was broken up by the Roman Catholic Church and Phillip IV of France in 1307 amid charges of satanism, sorcery, homosexuality and not giving the Pope or the King a big enough cut of the profits.
In 1913, an out-of-place-and-time hippie named Aleister Crowley published his gem of metaphysical paradoxes, The Book of Lies. Of which he accidentaly revealed one of the major sex magick secrets of the OTO (which he knew only to be a European Masonic group). The then “Outer Head of the Order” (grand-high-mucky-muck) in Germany, Theodore Reuss, contacted Crowley and insisted that he would have to be initiated and sworn to secrecy. Swiftly the young genius rose through the ranks to the “ninth degree” and soon was given a charter by Reuss to start up a British branch of the Order, which he pretty much ran as he damned well pleased.

As a magical lodge the OTO as run by Crowley consisted of an overlay of Oriental sex and drug mysticism on a base of standard Rosicrucian-Masonic ceremonial magic. The goal was primarily a religious one: “the Knowledge and Conversation of the Holy Guardian Angel” (communication with one’s “higher self”) and the eventual attainment of enlightenment. If Crowley had stuck with this, the other lodges of the OTO probably would have remained friendlier. But then he came up with the “Law of Thelema” (a Greek word meaning “will”).

In 1904, Crowley went through an intense three-day psychic experience during which he “received” through automatic writing a document known as The Book of the Law, supposedly dictated by various Egyptian deities. This extremely complicated mystical work stated, among other things, “Do what thou wilt shall be the whole of the Law” (one of the most misunderstood phrases in occult history) and “Love is the law, love under will.” Gradually Crowley adapted the entire of the OTO to this “Thelemite” doctrine of absolute metaphysical independence.

The Book of the Law has a number of harsh and complex passages which unfortunately make it easy to twist in order to suit the purposes of fascists, Satanists and other powertrippers, although Crowley himself seems to have been an Ayn Rand sort of anarchist. A number of the OTO lodges split over the thorny question of whether or not to “accept the law of Thelema.” Thus, even today, there are a handful of legitimate OTO groups which will have nothing to do with Crowley if they can help it.

But old Uncle Al was not about to let a lot of small minded conservatives stop him from declaring the Word of the New Aeon: Thelema! The Age of Horus (what current occultists call the Age of Aquarius) was upon us all, and Crowley considered his truth to be more important than his popularity.

Crowley’s OTO was fairly successful as such groups go, absorbing many of the members (and a great deal of written material) from the Hermetic Order of the Golden Dawn, which Crowley had previously joined just in time to be an active participant in its political dismemberment. Eventually Reuss resigned as Outer Head of the Order (“OHO”) in favor of Crowley, who went to town, chartering branches in Canada, the United States, Australia, South America and elsewhere.

But as the fad dwindled, so did membership, and the German lodges were destroyed by the Nazis (as part of their final solution to the uppity occultist problem). So by the time Crowley died in 1947 hardly any of the OTO lodges, original or Thelemite, continued to exist. Karl Germer, a ninth degree initiate from the Swiss OTO, then took over as OHO and did almost nothing for the rest of his life, since he was personally going in other spiritual directions.

Several years after Germer’s death in 1962, another ninth degree initiate from the United States, Grady L. McMurtry, decided to activate his “emergency powers” as Caliph of the OTO. The year before his death, Crowley had given McMurtry (who had been with him through the war) papers appointing him as his Caliph (since Crowley considered himself a “prophet” naturally his successor would be a “caliph”), in order to investigate some problems with the collapsing lodges in America. These made Grady second in command of the Order, under Germer.

Since nobody else in the late Sixties seemed to be doing anything, McMurtry decided to declare himself OHO, and to take over what was left of the OTO until such a time as the Order again had sufficient lodges and members to hold a proper international election for an OHO. After knocking around the Bay Area for a few years, he finally decided to try some “fairly heavy magick” last spring, opening up the Order to an influx of psychic energy from the ancient Egyptian Gods worshipped by the Order.

KAPLOOIE!! The hippie-commie-pervert-weirdo-heathen occultists of Berserkely descended upon him en masse, to check him out. They found a hard drinking, hard thinking crusty old man, with one of the world’s greatest collections of humorous Al Crowley stories.

Living with a priestess from the New Mexico desert, “Grady” found the living-room of their house filled every week with increasing numbers of Crowley fans, eager to join a serious (but not too serious) magical lodge based on his theories. One by one, many of the best and most scholarly occultists in the Bay Area began to show up to evaluate the “new” group, and quite a few of them seem to be sticking around to help with the organizational work. Friendly links have been made with the remnants of previous OTO lodges in the United States and a gradual unification seems to be shaping up.

Something magical certainly seems to be going on with the OTO now that it’s centered in Berkeley. Since April, over 80 new members have been initiated to the “zero-ith” degree (for novices) and a half a dozen or so people have been initiated to the first, second, and third degrees. (Thus, the hierarchy of the organizational structure is slowly being filled up properly.) A newsletter with real occult meat to it is being published quarterly, with subscribers and associate members from all over the world gobbling up each issue. Regular classes in Cabala, Yoga, Ceremonial Magic and Thelemic Metaphysics are being organized and the bi-weekly open meetings are filled to overflowing – enough so that the Order is having to rent a hall.

Perhaps the greatest sign of the Divine Intervention is that the rampant sexism of previous Crowley groups (a hangover from the 19th century) is fighting a losing battle against the increasing number of strong women joining the Order. Ceremonies are being edited and rules changed so as to allow full and equal participation for all, regardless of race, color, gender or place of planetary origin.

On October 12, the Feast of Crowleymas (Uncle Al’s birthday), the “Thelema Lodge” of the OTO was officially chartered as the grand lodge of the Order, just as the sun came out of its eclipse. Like a phoenix rising from the flames, Aleister Crowley’s Ordo Templi Orientis appears to be reborn, thanks to Bay Area occult know-how and a little divine help.

The following article appeared in

~ We wish to thank Frater Petros for making this page possible. ~